The German Association of the Gas and Water Industry (DVGW) has been working for more than ten years to convert existing natural gas infrastructures so they can handle hydrogen. Frank Gröschl, Head of Technology and Innovation Management, talks about H2vorOrt – the “H2 right there” initiative – and also about the planned EU regulatory framework and HYDROGEN DIALOGUE as an ideal setting for national and international dialogue within the hydrogen community. 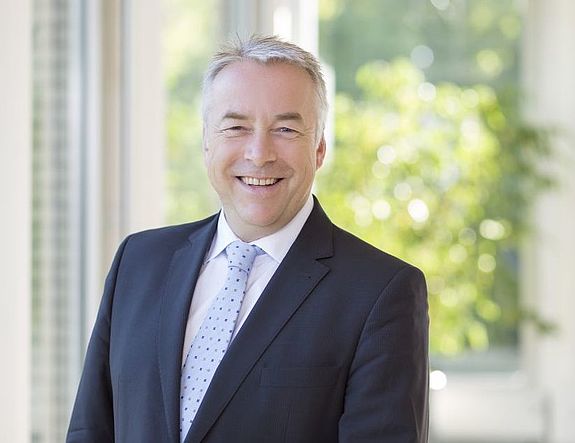 Mr Gröschl, Europe’s Ready4H2 distribution network initiative has laid out a timetable for the transition to a hydrogen economy in Europe. How ambitious do you think that is?

The Ready4H2 initiative’s timetable is very ambitious. Participating gas distribution network operators from all over Europe have made a clear commitment to start immediately making their network infrastructure completely ready to operate with climate-neutral gases, especially green hydrogen, by no later than 2045. These operators will play a key role in building up a hydrogen economy in Europe, because they’re the link between the European hydrogen backbone and the customers who are likely to want to buy hydrogen.

And what role is the German industry’s H2vorOrt platform supposed to play?

H2vorOrt – which roughly translates as “H2 right there” – is the German counterpart to Ready4H2. The scheme kicked off back in 2020, and by now has brought in almost 50 gas distribution network operators. All together these account for around 60 per cent of the length of the country’s gas networks. The project has two partner associations, the DVGW – the German Association of the Gas and Water Industry – and the VKU – the German Association of Local Public Utilities – and it has launched its initiative to make gas distribution networks climate-neutral nationwide. The centrepiece of that initiative is the effort to develop a “Gas Network Territory Transformation Plan”, or GTP for short. This will be the core, standardised planning tool for decarbonising Germany’s gas distribution networks.

The first guidelines were already released this year, and have been sent out to all the German gas network operators. Their individual feedback will be incorporated into a general, nationwide plan that lays out a coherent target status for a climate-neutral gas infrastructure. The planning work for the GTP is expected to be completed by 2025. Germany is a European pioneer here. And its experiences will be shared with our European partners.

The DVGW has welcomed the EU Commission’s efforts to establish a regulatory framework for hydrogen. But that framework has proved to have a number of shortcomings. What specific devils do you see in the details?

Unfortunately the Commission’s proposals presume that the network infrastructure for hydrogen will have to be built from scratch, on a greenfield basis. But the German gas industry doesn’t see it that way. From a national economic viewpoint it makes more sense, and also saves more time, to develop the hydrogen infrastructure out of the existing gas infrastructure, as for instance H2vorOrt is planning to do. So we’ve proposed that the European institutions should revise the legal framework accordingly. Specifically, that means we need unbundling requirements that will make it easier to develop the hydrogen network instead of interfering with it – things like distinguishing between the transmission and distribution network levels for hydrogen too, analogously to gas and electricity, or also applying the same unbundling regulations to hydrogen networks as for gas network operators.

HYDROGEN DIALOGUE also addresses the hydrogen infrastructure in Europe. Does the DVGW believe there will be enough pipelines?

That will depend a lot on using the existing gas infrastructure to carry and store hydrogen in the future. It would be irresponsible for the plans to ignore this asset, which is worth hundreds of billions of euros. Just lately, very highly placed politicians have said municipal utility companies should have the task of demolishing gas networks since the equipment is unfit for the future. But that would jeopardise the success of a climate-neutral energy transformation, and put the reliability of Germany’s energy supply at risk. The gas network in Germany is about half a million kilometres long. Almost half of the country’s roughly 40 million households are heated with gas. Around 600 large industrial customers are supplied directly from the gas transport networks.

By far the majority of gas users – roughly 1.6 million industrial and commercial end users, especially small and medium enterprises – are hooked up to the distribution networks. The gas industry is also working already to transform its infrastructure for the hydrogen age. In Germany, about 90 per cent of the hydrogen backbones will be transformed versions of the existing natural gas infrastructure; only about 10 per cent will be new construction. That’s a cost-effective solution, because it doesn’t call for a lot of new construction, the way the electric power grid will have to do. There are already concrete plans for the H2 Backbone in Germany and the European Hydrogen Backbone in the EU. The Gas Network Territory Transformation Plan in Germany will connect up the distribution network structures to distribute H2 at the regional level.

Current studies confirm that the natural gas lines are H2-ready. Any remaining gaps in individual situations will be filled in, especially thanks to DVGW research. By 2025 there will even be kits to retrofit gas heaters to run on 100 per cent hydrogen. Even with no alterations at all, legacy gas heaters – some of them decades old – already have no problem running on a 20 per cent hydrogen mix. That was confirmed in a joint project by the DVGW and Avacon in Schopsdorf (Saxony-Anhalt).

How do you see HYDROGEN DIALOGUE developing, and what role will the DVGW play in the hydrogen economy?

The event says right in its title what we so urgently need – a national and international dialogue in the hydrogen community. We’re setting the course now for how we’re going to supply energy in the future. Hydrogen will be an indispensable part of that. Germany is playing a pioneering role in research and development and in rolling out the technology. The DVGW has been at work for more than ten years – longer than many others – finding out how to use hydrogen sensibly and practicably, and how to convert the existing natural gas infrastructures so they can handle hydrogen. Our broad know-how is making a vital contribution to the energy transformation. We’re serving as both an innovation driver and an enabler for technologies and standards.

Germany’s Energy Industry Act designates the DVGW as the institution for hydrogen infrastructures. In that capacity, its expertise is immensely significant for political decisions about H2, and thus for the industry’s entire transformation. And we want the relevant stakeholders to have a say in that process in Nuremberg, too. Today’s geopolitical situation, especially in matters of the energy supply, demands that we need to talk together directly and fast. HYDROGEN DIALOGUE is the ideal place for that.

Many thanks for the interview

As usual, you can find the entire program of the HYDROGEN DIALOGUE – Summit & Expo 2022 at hydrogendialogue.com/en/event-program.

Be there and secure your ticket today!